In 2018/19 Waikato Regional Council staff were developing a regional soils strategy to inform longer-term land management and resource use outcomoes in the Region. After discussion on key issues behind the strategy some inital scenarios were identified whcih could be run in WISE to inform the develoment of the Strategy.

The analysis of scenarios undertaken in WISE, the key findings from the scenario outputs and possible next steps based on this information is summaried below.

The WISE Reference scenario was compared with scenarios that:

The 'peat retirement' scenario was then adjusted to retire only peat soils within drainage assisted (pumped) areas.

Finally the implication of coastal inundation from projected sea level rise (modelled to support another case study) on peat soils in Hauraki basin was assessed.

Under the current Reference scenario (i.e current zoning restrictions) a further 3500 ha of high class soils could be loss by 2030, and up to 6,500 ha by 2060 (Figure 1). Most of this loss occurs in Waikato District, although after 2031 alot of this loss is due to Hamilton city expansion into the Waiakto DIstrict. Most of this land use change is the result of expansion in residential lifestyle and residential low density land use, and about 10% of it being industrial land development.

Restricting future urban development on high class soils would have impacts on the current planned zoning for future development in Hamilton, Cambridge, Te Awamutu, Tuakau and Pokeno. Applying this restriction could mean a ‘shortfall’ in available zoned areas for residential growth from about early 2030’s. Approximately 2000ha of alternate area would need to be zoned low density residential in Region to meet demand out to 2060 if current undeveloped high class soils are to be maintained.

Hamilton particularly has large area of high class soils within its current boundary as well as in planned expansion areas to the north and north-east of city (Figure 2). Significant areas of high class soils also exist in areas planned for industrial/manufacturing growth at Te Rapa/Rotokauri, Ruakura and Horotiu. Approximately 700ha of alternate area would need to be zoned manufacturing in the Region to meet demand out to 2060 if current high class soils are to be maintained. 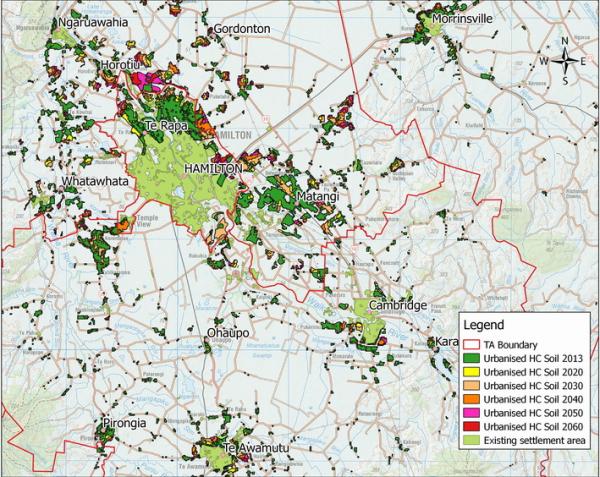 In a scenario to optimise the use of elite soils (Land use capability class 1 soils) for only vegetable cropping and horticulture this would replace existing or future growth of ~1000 ha of dairying, ~300 ha of Lifestyle blocks, ~40 ha of low density residential and 180 ha of manufacturing. The benefit would be ~1400 ha more of the elite soils being used for vegetable cropping and horticulture.

Changing use of peat soils

Retiring all ‘Peat’ soils from productive pastoral land uses would be a major change in land use across the Hauraki/Hamilton basins. It could potential affect ~100,000 ha of productive land use.  The largest impact would be on dairying (~71,000 ha which represent ~11% of regional dairy land use) and sheep and beef (~14,000 ha which represent ~2% of regional sheep and beef land use). The scenario modelling shows that for Sheep and Beef it is relocated to other parts of Region (although not all sheep and beef was pushed of peat in these initial scenarios. For Dairying however, most of the displaced land use could not be relocated to other parts of region due to lack of land suitability or policy restrictions.

Under the initial scenario analysis the transition is mainly into forestry or indigenous, further scenarios analysis restricted forestry onto these soils so that the outcome of complete retirement was achieved. Further scenarios could be used to test alternate land use and transition options.

The majority of the ‘Peat’ soils are within managed drainage schemes (74% of by area) with 24% of all peat soils being in ‘pumped’ schemes (~27% of the impacted dairying is in pumped schemes).

A scenario that looked at removing agricultural land uses from just the pumped drainage areas represented a smaller impact  (~25,000 ha total area) but the relocation outcomes for land uses such as sheep and beef and forestry were similar.

Significant areas of peat occur within the low lying part of the Hauraki Plains and this area is most vulnerable to potential coastal inundation from projected sea level rise. Modelling results show that about 3000 ha would be affected at a level (RL) of 1800mm  and upto 14,000 ha at RL 4800mm.

The power of scenario analysis is in undertaking iterations to refine testing of policy options and explore specifics of plausible land use change outcomes. In this study only one or two iterations were undertaken for the initial management question.

These management questions have focused on the extent and risks to particular soil types/attributes. The ‘follow-on’ questions that have emerged from looking at this analysis tend to be more focused on alternate land management /use scenarios that are often wider than specific soils management and are more about sustainable/best use options for land management.

The natural extension of this initial work is therefore to use WISE and the scenario planning approach to investigate and inform some of the wider land use/best use questions that would come with the development of broader land management strategy.